Most known for his short stories “The Legend of Sleepy Hollow” and “Rip Van Winkle,” Washington Irving was a popular writer from the early 1820s to the present day. His first major work A History of New-York from the Beginning of the World to the End of the Dutch Dynasty, by Diedrich Knickerbocker (1809), was a parodied history of early New York City. The short sketches, compiled as The Crayon Papers, were written under the pseudonym Geoffrey Crayon, and focused on Crayon’s travels throughout Europe and America–including Florida. A sketch from that collection,“The Seminoles,” first appeared in The Knickerbocker magazine in 1840, nearly twenty years after Florida became a U.S. territory following three hundred years of Spanish colonial rule.

Writing as Geoffrey Crayon, Irving introduces the reader to the Seminole tribe, heavily incorporating William Bartram’s writings in the introduction to the narrative “Origin of The White, The Red, and The Black Men: A Seminole Tradition.” This legend, while couched as a sketch, had immediate historical origins. In February 1842, President John Tyler had appointed Irving as Minister to Spain. Irving was a prime candidate for the position for multiple reasons, including his seventeen-year European residence. However, the most significant reason for Irving’s appointment was in connection to his 1828 invitation by U.S. Ambassador to Spain, Alexander Hill Everett for Irving to visit Madrid and Andalcucia, where he studied Spanish archives concerning early exploration. This invitation led to a series histories and sketchbooks, including The Life and Voyages of Christopher Columbus, The Conquest of Granada, and The Alhambra. 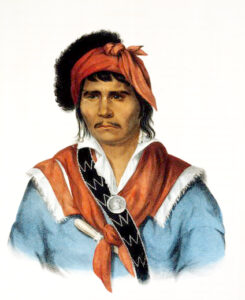 While not mentioned by name in Irving’s Seminole account, the “chief” narrating the origin of the story of the race was most likely Neamathla, who, in St. Augustine on September 18, 1823, was involved in the Treaty of Moultrie Creek and spoke out against the U.S. government involvement in the territory of Florida. Not only was Neamathla speaking out against the forced removals from Florida land, but the U.S. government’s desire to erradicate Seminole culture through forced assimilation of children into residential schools. Irving’s account is most likely inaccurate, and depicts how Native storytelling traditions were–and continues to be–twisted for white settlers to position themselves over Indigenous tribes.

It is essential to note that the Seminoles have preserved their own traditions, including a legend of creation, which is available online. The Irving account, as well as other versions of Neamathla’s speech, conspicuously devalue Black Floridians. Indeed, Florida was a haven for freemen, which often joined the ranks of the Seminoles, eventually becoming known as Estelusti (Black Seminoles). In this speech, Neamathla seems to justify the position of Estelusti members as slave labor and not necessarily part of the Seminole Nation, a longstanding controversy for descendents of Black Seminole Freedmen. For more information concerning Seminole storytelling traditions including the authorized Seminole legend concerning creation, please visit the official website of the Seminole Tribe of Florida.

When the Floridas were erected into a territory of the United States, one of the earliest cares of the Governor, William P. Duval, was directed to the instruction and civilization of the natives. For this purpose he called a meeting of the chiefs, in which he informed them of the wish of their Great Father at Washington that they should have schools and teachers among them, and that their children should be instructed like the children of white men. The chiefs listened with their customary silence and decorum to a long speech, setting forth the advantages that would accrue to them from this measure, and when he had concluded, begged the interval of a day to deliberate on it.

On the following day a solemn convocation was held, at which one of the chiefs addressed the governor in the name of all the rest. “My brother,” said he, “we have been thinking over the proposition of our Great Father at Washington, to send teachers and set up schools among us. We are very thankful for the interest be takes in our welfare; but after much deliberation have concluded to decline his offer. What will do very well for white men will not do for red men. I know you white men say we all come from the same father and mother, but you are mistaken. We have a tradition handed down from our forefathers, and we believe it, that the Great Spirit, when he undertook to make men, made the black man; it was his first attempt, and pretty well for a beginning; but he soon saw he had bungled; so he determined to try his hand again. He did so, and made the red man. He liked him much better than the black man, but still he was not exactly what he wanted. So he tried once more, and made the white man; and then he was satisfied. You see, therefore, that you were made last, and that is the reason I call you my youngest brother.

“When the Great Spirit had made the three men, he called them together and showed them three boxes. The first was filled with books, and maps, and papers; the second with bows and arrows, knives and tomahawks; the third with spades, axes, hoes, and hammers. ‘These, my sons,’ said he, ‘are the means by which you are to live: choose among them according to your fancy.’

“The white man, being the favorite, had the first choice. He passed by the box of working-tools without notice; but when he came to the weapons for war and hunting, he stopped and looked hard at them. The red man trembled, for he had set his heart upon that box. The white man, however, after looking upon it for a moment, passed on, and chose the box of books and papers. The red man’s turn came next; and you may be sure he seized with joy upon the bows and arrows and tomahawks. As to the black man, he had no choice left but to put up with the box of tools.

“From this it is clear that the Great Spirit intended the white man should learn to read and write; to understand all about the moon and stars; and to make everything, even rum and whisky. That the red man should be a first-rate hunter, and a mighty warrior, but he was not to learn anything from books, as the Great Spirit had not given him any: nor was he to make rum and whisky, lest he should kill himself with drinking. As to the black man, as he had nothing but working-tools, it was clear he was to work for the white and red man, which he has continued to do.

“We must go according to the wishes of the Great Spirit, or we shall get into trouble. To know how to read and write is very good for white men, but very bad for red men. It makes white men better, but red men worse. Some of the Creeks and Cherokees learned to read and write, and they are the greatest rascals among all the Indians. They went on to Washington, and said they were going to see their Great Father, to talk about the good of the nation. And when they got there, they all wrote upon a little piece of paper, without the nation at home knowing anything about it. And the first thing the nation at home knew of the matter, they were called together by the Indian agent, who showed them a little piece of paper, which he told them was a treaty, which their brethren had made in their name, with their Great Father at Washington. And as they knew not what a treaty was, he held up the little piece of paper, and they looked under it, and lo! it covered a great extent of country, and they found that their brethren, by knowing how to read and write, had sold their houses and their lands and the graves of their fathers; and that the white man, by knowing how to read and write, had gained them. Tell our Great Father at Washington, therefore, that we are very sorry we cannot receive teachers among us; for reading and writing, though very good for white men, is very bad for the Indians.”