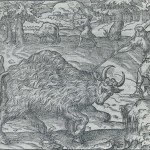 Century. A French toehold founded in 1564 met Spanish resistance, leading to the founding of St. Augustine in 1565. Franciscan missions met some success converting native peoples, yielding key documents that offer a glimpse into indigenous cultures that have since been erased. Claims to La Florida changed after the Seven Years War (1763), American War for Independence (1783), and Andrew Jackson’s 1818-19 invasion. Florida became a United States territory in 1821 and entered the union as the twenty-seventh state in 1845.

Long considered a borderland, La Florida yielded a rich literature, composed of both utilitarian and belletristic writings. This website is an ongoing, student-driven project that provides a summary view and verbal archive of a contested region. “Visions of Early Florida” offers a gateway for those seeking to explore the region’s still untapped literary history, particularly its circulation and translation within the realm of the imaginary. Student contributors to this site prepare the texts and headnotes, using these individual recovery projects to launch original research.

The definition of “early Florida literature” is as expansive as the place was itself. Accuracy matters less than impressions; imperatives of genres and rhetorical agendas may trump “what happened.” Readers who seek to learn more about the selections are encouraged to follow the suggested readings on each page.

Do you have a text to suggest? Contact Thomas Hallock, thallock@mail.usf.edu.