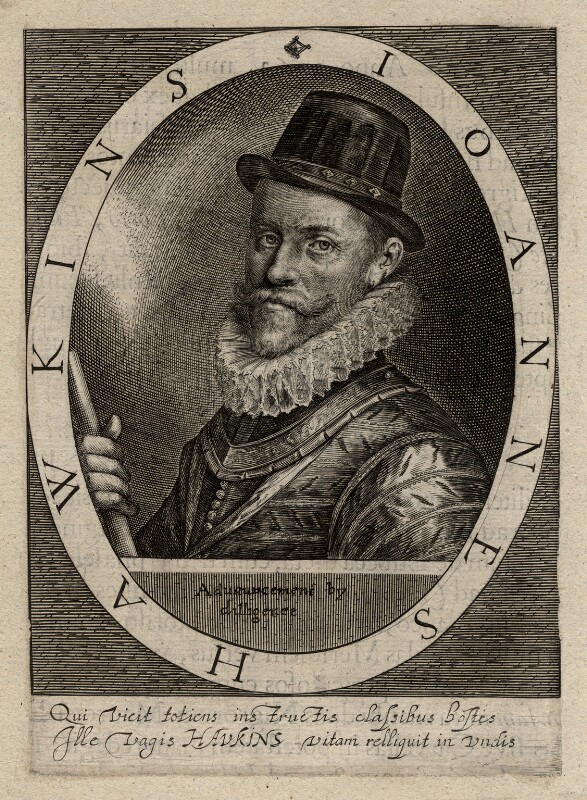 fascinating account, which delivers the English their first knowledge of Florida. John Sparke “the younger” was born to a genteel family in Plymouth, England. The remainder of his life is uncertain, save that he accompanied John Hawkins’ second voyage to the Spanish colonies, recording the expedition in The Voyage Made by M. John Hawkins Esquire, 1565, a portion of which is presented here. Sparke’s account first reports Hawkins’ experiences on the African coast as well as some in the West Indies. However, what is of particular importance to us is his subsequent description of Florida, its people, customs, landscape, wildlife, and interaction with the French previously settled there.

Sir John Hawkins was born in 1532, also in Plymouth, England. No small figure of his day, the list of Hawkins’ accomplishments runs long: naval administrator, commander, one of the foremost seamen of 16th-century England, chief architect of the Elizabethan navy, slaver, and leader of the recounted expedition to Florida. Hawkins’s interference in the slave trade between Africa and Spanish colonies stirred relations between the English and the Spanish, which would eventually culminate in war in 1585. Beyond his exploits in the slave trade, which was the intent of this his second voyage, Hawkins’ journey to Florida as recorded by Sparke invited more English commercial expeditions to the Spanish colonies; Sparke’s detail and style in particular not only ignited the imagination of the English, but influenced later reporting of voyages.

Hakluyt, Richard. The Principall Navigations Voiages and Discoveries of the English Nation, Hakluyt Society and the Peabody Museum of Salem, 1965.

…. In ranging this coast along, the captaine found it to be all an Island, and therefore it is all lowe land, and very scant of fresh water, but the countrey was marvellously sweet, with both marish and medow ground, and goodly woods among. There they found sorell to grow as abundantly as grasse, and where their houses were, great store of maiz and mill, and grapes of great bignesse, but of taste much like our English grapes. Also Deere great plentie, which came upon the sands before them. Their houses are not many together, for in one house an hundred of them do lodge; they being made much like a great barne, and in strength not inferiour to ours, for they have stanchions and rafters of whole trees, and are covered with palmito-leaves, having no place divided, but one small roome for their king and queene. In the middest of this house is a hearth, where they make great fires all night, and they sleepe upon certeine pieces of wood hewin in for the bowing of their backs, and another place made high for their heads, which they put one by another all along the walles on both sides. In their houses they remaine onely in the nights, and in the day they desire the fields, where they dresse their meat, and make provision for victuals, which they provide onely for a meale from hand to mouth. There is one thing to be marvelled at, for the making of their fire, and not onely they but also the Negros doe the same, which is made onely by two stickes, rubbing them one against another: and this they may doe in any place they come, where they finde sticks sufficient for the purpose. In their apparell the men onely use deere skinnes, wherewith some onely cover their privy members, other some use the same as garments to cover them before and behind; which skinnes are painted, some yellow and red, some blacke and russet, and every man according to his owne fancy. They do not omit to paint their bodies also with curious knots, or antike worke, as every man in his owne fancy deviseth, which painting, to make it continue the better, they use with a thorne to pricke their flesh, and dent in the same, whereby the painting may have better hold. In their warres they use a sleighter colour of painting their faces, whereby to make themselves shew the more fierce; which after their warres ended, they wash away againe. In their warres they use bowes and arrowes, whereof their bowes are made of a kind of Yew, but blacker then ours, and for the most part passing the strength of the Negros or Indians, for it is not greatly inferior to ours: their arrowes are also of a great length, but yet of reeds like other Indians, but varying in two points, both in length and also for nocks and feathers, which the other lacke, whereby they shoot very stedy: the heads of the same are vipers teeth, bones of fishes, flint stones, piked points of knives, which they having gotten of the French men, broke the same, and put the points of them in their arrowes heads: some of them have their heads of silver, othersome that have want of these, put in a kinde of hard wood, notched, which pierceth as farre as any of the rest. In their fight, being in the woods, they use a marvellous pollicie for their owne safegard, which is by clasping a tree in their armes, and yet shooting notwithstanding: this policy they used with the French men in their fight, whereby it appeareth that they are people of some policy: and although they are called by the Spanyards Gente triste, that is to say, Bad people, meaning thereby, that they are not men of capacity: yet have the French men found them so witty in their answeres, that by the captaines owne report, a counseller with us could not give a more profound reason.

Here I have declared the estate of Florida, and the commodities therein to this day knowen, which although it may seeme unto some, by the meanes that the plenty of golde and silver, is not so abundant as in other places, that the cost bestowed upon the same will not be able to quit the charges: yet am I of the opinion, that by that which I have seene in other Islands of the Indians, where such increase of cattell hath bene, that of twelve head of beasts in five and twenty yeeres, did in the hides of them raise a thousand pound profit yerely, that the increase of cattel only would raise profit sufficient for the same: for wee may consider, if so small a portion did raise so much gaines in such short time, what would a greater do in many yeres? and surely I may this affirme, that the ground of the Indians for the breed of cattell, is not in any point to be compared to this of Florida, which all the yeere long is so greene, as any time in the Summer with us: which surely is not to be marvelled at, seeing the countrey standeth in so watery a climate: for once a day without faile they have a shower of raine; which by meanes of the countrey it selfe, which is drie, and more fervent hot then ours, doeth make all things to flourish therein. And because there is not the thing, we all seeke for, being rather desirous of present gaines, I doe therefore affirme the attempt thereof to be more requisit for a prince, who is of power able to go thorow with the same, rather then for any subject.